This new feature opens up significant expansion opportunities for broadening the metropolitan coverage delivered by TRANSnet, with benefits to both public transport operators and bus passengers through more efficient journeys.

Late running buses can be automatically provided with priority at traffic lights. Of consideration was the introduction of a trial system that could both control the ability to maintain scheduled headways between buses as well as introduce a monitoring feature that could provide empirical data that could be used in the formation of reports for review.

The following results were achieved:
Reduction in Queuing Time: 10.3%
Improvement in Headway Regulation: 16.6%

On average, TRANSnet demonstrated that if could deliver an average of 10.3% reduction in the time buses spent queuing at traffic signals. A number of new features were added to TRANSnet, including Automated Bus Headway Scheduling, and several new Reporting and Monitoring tools were also introduced.

The trial utilised multiple technologies based on the TRANSnet Tracker units, including GPS positioning data, Wireless network communications, and Automated Scheduling, all working together in an integrated environment to keep bus services operating to expected headways. The TRANSnet Public Transport Priority System for SCATS now has a new SMS reporting sub-system that can automatically send an SMS alert to up to three mobile devices if a vehicle update alert is received.  Settings are managed through the Preferences dialog. This allows unexpected outages of field communications devices to be instantly reported for attention/action by support staff, thus keeping the system operating effectively and efficiently. A test button is also provided that sends a Test Text Message to the phone. This is provided to check that the system is configured correctly. These tools quickly provide the operator with valuable feedback to quantify priority operation, success rates, and identify issues that should be investigated based on performance improvement.

The investment came after an extended trial period that allowed VicRoads staff to evaluate and monitor TRANSnet, and to liaise with public transport operators on the performance benefits delivered by the TRANSnet system. VicRoads uses TRANSnet in conjunction with SCATS to automatically provide multiple levels of priority at signalised intersections, depending on schedule adherence, queuing time, delays and much more.

For Public Transport operators that don’t work to specific public transport ‘time-of-day schedules’, a new Headway Management System has been implemented. Different headways and expected Journey times can be implemented for any day of the week, and any time of the day for either direction of travel.

When a vehicle starts a journey, the next scheduled time is calculated based on expected headway, and this further schedule is automatically added to the system. When the following vehicle arrives, its start time is compared to the previously calculated schedule to determine schedule adherence, a further future schedule is again automatically created, and the vehicle is tracked into the system. This allows schedules & punctuality to be continually calculated dynamically, without the requirement to have any previously defined schedules installed. TRANSnet can operate with any combination of Pre-programmed vehicle schedules or new Headway schedules within the system simultaneously.

TRANSnet applies a top-down approach to bus priority where the local traffic signal controller does not require reprogramming. The bus detection uses ‘virtual detectors’ for queue detection and journey time information. Therefore physical installation of detectors is also not required. The priority can be activated on a number of performance conditions including schedule adherence.

A number of different scenarios have been tested using TRANSnet and SCATS Action Lists. VicRoads found that all of the scenarios using either bus delay or schedule adherence triggering mechanisms have operated successfully. The priority enabled in SCATS has included adding a right turn phase in the sequence, increasing the green time for a bus movement and dwelling a phase without skipping other phases to ensure the bus can reduce the buses time in the virtual detector zone. 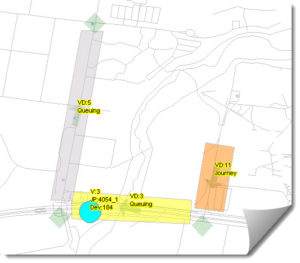 The system allows 3G wireless communications from the SCATS central computer to communicate to intersection controllers, and is especially cost-effective where wired service telecommunications are limited or unreliable. For the test, sites were deliberately chosen to establish the ability of the system to operate successfully over long distances. The trialed communications system has proven itself to be robust and reliable. Statistical figures of more than 96% uptime are considered to demonstrate a very satisfactory result for this type of communication. The Transnet communicatiosn system achieved an uptime of more than 99.5% wireless communications over and average 24 hour period, and this could be further improved with assistance from the wireless network service provider.

The Wireless Communications System as trialed is definitely considered a successful workable solution for operating the SCATS Management System with Intersection Controllers.

SCATS is a registered trademark or Roads and Maritime Services

Integrate Native support for the EOTopo high-definition 200k maps has now been integrated into TrackRanger. While TrackRanger could always use EOTopo, the new features allow EOTopo to be automatically selected as the default map set.